First off, if you celebrate Halloween, then happy Halloween! I wish I could say Happy _________, but that would be spoiling our Halloween-based secret party member. Of course, it is a Lovecraft game, so I guess they are all a bit ‘Weenie.

We’re sitting at 99%. I’ve completed about four full runs of the game without new bugs, and those that I have hit are either due to renaming files or cleaning up hub areas of the code. Anything from here on out is most likely going to be aesthetic, such as a change to our menu GUI and a possible fix on the color scheme of our dialogue options.

We have been in beta for two and a half weeks now, about a week less than we wanted, but things come up when you’re working a part-time, non-paying job. It has nothing to do with a lack of dedication, but rather a lack of time. It’s a bummer, but it’s also a fact of life.

Thirdly: we put up our Steam Greenlight page! Click on Perry fighting the Olympic Velociraptor Bobsled Team to be magically transported there via technology. 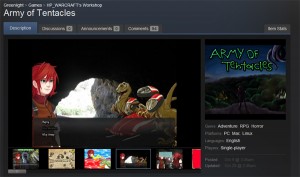 We originally put it up without a video because Kroze and I were literally hopping in a taxi to go to New York within the hour. It worked, too, since we got a huge boost in upvotes from the networking we did at New York Comic-Con. But we also need to put up a trailer, as such a thing would boost our “street cred”. We have been waiting on the newest builds of the game to do so, and it should be up shortly. We tried in New York but found it was just too busy of a time. It was super fun to hang out with the VOICE CAST for the game, and get things rolling (we currently have about seven or more fully recorded).

That brings us to Thing #4:

Fourthly, Kroze and much of the voice cast will be at Youmacon on Saturday for an Army of Tentacles VO panel. If you’re in the Detroit area, or already at the Con, you might fancy to hit it up. 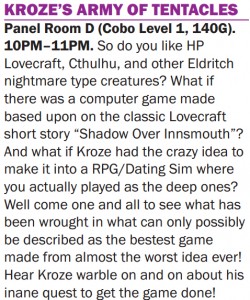 There was a lot of discussion from all sides concerning whether or not we should publicize our voice cast – we’d like the game to stand on it’s own. Some said it would help us sell the product if we said “lookie lookie”, but we decided to err on not hurting any of the friendships that we have cultivated in order to maybe get a few bucks. So you’ll just have to hear it for yourself!

Everyone reading this, have a nice night amd a happy rest of the holiday! The spooky, spooky holiday!