First of all, we’re here. New site, new blog. A bit jetlagged so this will be brief. Or weird. Or both. 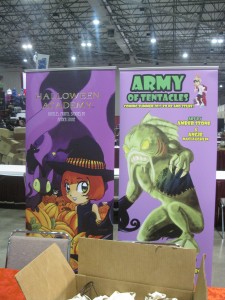 Went to Kansas. Demo’d the beta version of Army of Tentacles. Response was exceedingly positive, more than I originally thought for bringing a video game to a comics convention. A few people even asked me what the link to Kickstart it was. That was something. People especially responded well to our Argument System – how the combat is dialogue based instead of violence.

But we found from Kansas that there’s some room to grow. For one, we need to re-do the entire UI system because the current one just ended up confusing people. Why was this thing here? Why was that thing there? What do I click now? So we can definitely make things more accessible.

This week/rest of the month:
* work on inputting the first act of the script into the game
* mapping out the quest system and breakdowns
* continue UI work and finish up the Argument system